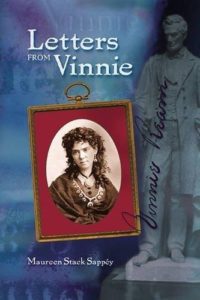 LETTERS FROM VINNIE  is an epistolary novel about the actual Civil War sculptress Vinnie Ream who risked her reputation and life to sculpt Abraham Lincoln. Her white marble Lincoln still stands at the Capitol’s entrance in Washington, D. C.

Accuracy in historical works is important, but the publisher, Stephen Roxburgh, taught me an important lesson: in historical fiction, the story must come before the facts.

Released in hardcover (1999) and softcover (2007), this novel received a Boxed Review in Booklist, reviews in Library Journal and Kirkus Reviews, and a recommendation in the New York Times Book Review.

A lengthy excerpt from Letters from Vinnie opens a hardcover anthology (2009) that won the George Washington Medal of Honor from the Freedoms Foundation of Valley Forge. David Madden, the former director of the US Civil War Center, Louisiana State University, reviewed and endorsed all of my Civil War novels.

Signed hardcover and softcover copies are available through this website. 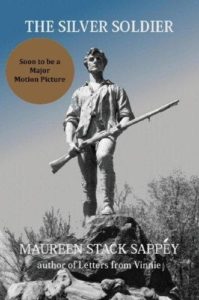 Before publication by Pavilion Books (hard and soft) in 2010, producers Joe Napolitano and Elizabeth Gast optioned my manuscript for film in 2010 and again in 2015.

Chris Ruppenthal, the producer’s screenplay writer, has completed the script.

The story’s premise: Consumed by guilt over his part in the wrongful death of his closest friend, Paul Revere’s oldest son is thrust into the drama unfolding on the streets of Boston in the 1770s. A senseless shooting, the Massacre on King Street, the dumping of tea in the harbor, the near-fatal ride by his father, and the slaughter of Patriots on Lexington Green all define the struggle for liberty for the younger Paul. Pitted against Andrew Carlton, a ruthless Tory and father of the girl he loves, Paul learns to forgive himself for the tragedy that has haunted him from an early age. In his unique position as Revere’s son, Paul reveals the complexities of his courageous father who accomplished far more than a midnight ride on a borrowed horse. This novel centers on oppression and rebellion, and the selfless love between a son and his remarkable father, Paul Revere. 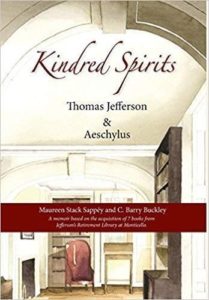 Of the two history books I’ve written, Kindred Spirits: Aeschylus and Thomas Jefferson  proved the greatest challenge for me as a historian.

Published in 2015 as a limited edition by Chester River Press, the publisher Gerald Cataldo wrote:

Kindred Spirits is a biblio-centric memoir chronicling the acquisition and restoration of seven rare books from Jefferson’s Retirement Library at Monticello. This is the remarkable story of the serendipitous discovery of a seven-volume set of Aeschylus’s Tragedies owned by Thomas Jefferson, and the many bibliophiles, Jeffersonians, historians, scholars, and yes, Ancient Greeks, who helped complete a journey of personal fulfillment and historical significance, all the while honoring one of our most accomplished Founding Fathers. Share Barry Buckley’s thoughts and emotions as he gazes for the first time on Jefferson’s personal book markings, oversees the book restoration process, and with renowned author Maureen Stack Sappéy, traces the connections from Ancient Greece up through the centuries to the fledgling United States.

The book features the artistry of Bridget Hassan, an award-winning graduate of the University of Notre Dame’s architecture program. Known for her beautiful architectural renderings in watercolor, Bridget’s painting of Thomas Jefferson’s library at Monticello graces the book’s front cover.

The back cover features Jon D. Mikalson’s review. A noted Jeffersonian and the author of 7 books about Ancient Greece, Jon is the William R. Kenan, Jr. Professor of Classics at the University of Virginia.

Robert Potters’ 1812 translation of Aeschylus’ Persae is still in print, available even in Kindle. Modern scholars depend on such translations to understand this complicated author, who, all would agree with Mr. Jefferson, can be incomprehensible in his flights among the clouds. Today, scholars often join their Greek texts of Aeschylus’ plays to a translation in their own language. In this, as in so much else, Mr. Jefferson anticipated and surpassed us all. In his retirement at Monticello he disassembled his editions of Aeschylus and reassembled them in seven handsomely bound volumes, one for each surviving tragedy, each with the Greek text and with French, Latin, and Potter’s English translations. Kindred Spirits tells the story, both historical and personal, of the creation in about 1820 and the rediscovery of this marvelous set in 2006, and of the dedication of Barry Buckley, an amateur Jefferson enthusiast, who recognized its value and saw to its preservation. Buckley and his co-author Maureen Sappéy place these seven volumes and the plays of Aeschylus themselves into Mr. Jefferson’s life, love of books and antiquity, and broader concerns for democracy and freedom. Kindred Spirits shows on every page that Mr. Jefferson, Aeschylus, and the two authors are clearly all kindred spirits.

Signed hardcover copies are still available through this website.